About the IUC History

In 2017, the Inter-University Centre in Dubrovnik celebrated its 45th anniversary. The centre has lived a rich life so far. It is all set to continue its mission.

The idea of a centre developed in response to urgent concerns. There was a cold war going on. Concerned scholars saw the importance of creating new opportunities for contact and exchange of knowledge and ideas across division lines. Would it be possible to create strong arenas where scholars from various parts of the world could meet to pursue important scientific issues in a peaceful and peace-generating way? There was a wish to strengthen the role of scientists in bridge-building between nations and between cultures, between ideologies and between political systems, rather than continuing the troublesome divides that we had become so used to over the decades following World War II.

Plans for a United Nations university were being discussed in the late 1960ies. In a meeting of university leaders in Montreal in 1970, the Rector of the University of Zagreb at that time, Ivan Supek, made a proposal that won wide support. He said, let us build an inter-university centre that is fully in the hands of the cooperating scholars and universities themselves – an institution free of government control, as he said.

Luckily, the city of Dubrovnik had offered Ivan Supek a building that could serve as a home for the kind of centre that he had foreseen.

It must be remembered that the country called Yugoslavia held a unique position at the time: Yugoslavia under Tito was non-aligned. It had the potential to provide conditions for contacts that could not otherwise be achieved. Dubrovnik, with its rich history and culture – and its beauty and friendly atmosphere – certainly appeared as an ideal site – and an inter-university centre here could also serve as a breathing-hole between East and West. For example, scholars from Eastern Europe were allowed to travel to Dubrovnik, while on the whole, countries in the West were beyond reach.

So, a small group of individuals representing a handful of universities internationally were invited to come to Dubrovnik to consider Ivan Supek’s idea. 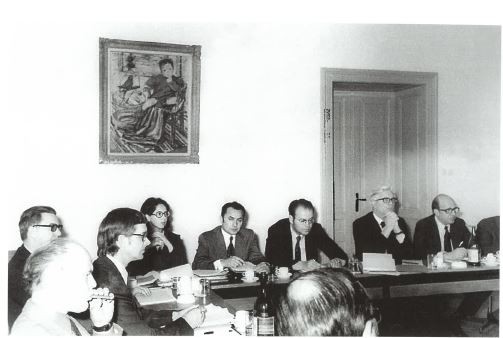 The decision was made: The Inter-University Centre was to become reality, and work was started to establish a viable organisation and a sound basis for effective operation.

The centre could not have been established and could not have entered into its successful life had it not been for the generosity extended to it by the University of Zagreb. While the IUC has benefited from the generosity of the University of Zagreb we feel convinced that we have given much in return, for example by connecting young scholars from Croatia and the broader region to lively international networks of scholars.

The Inter-University Centre soon became a very attractive venue for academic exchange. From a handful of universities represented by the founders, the number of universities formally associated with the IUC grew to more than 250 before the outbreak of the wars in the territory of former Yugoslavia.

However, not event wars did stop the activity of the Centre. Brutal attacks on Dubrovnik culminated on 6th of December 1991, when the building housing the IUC was one of the targets. After several direct hits by incendiary shells, the whole building burned down, including the library with 30 000 volumes. Only the outside walls and the staircase survived. Luckily, most of the archive, the institution's memory, was saved from flames.

Then, many IUC friends mobilized support for the Center and also for Dubrovnik, and the activity continued. In the first years, courses were held in other locations in Dubrovnik, and in fall of 1993, the first part of the reconstruction of the building, financed by the Croatian government and University of Zagreb was completed and the IUC returned to its home at Don Frana Bulića 4.

Following the war, the number of member universities has declined to approximately 170 today. Universities now had other avenues for contact and cooperation. And of course, the EU has a whole series of extensive programmes to promote study abroad and to globalise higher education. The main point, from the viewpoint of the IUC, is that the level of programme activities in courses and conferences here remains as high as ever. Scholars and students keep coming. They seem happy while they are here – and they are usually eager to come back for new IUC events.

The world around us keeps changing and the IUC is adapting to new conditions. The former breathing-hole function between East and West is not so important any more, but we feel that the IUC has much to do in providing a venue for intellectual exchange in the environment of the new Southeast Europe, while issues of the globalisation of university life – within the world community – presents many new challenges for an organisation such as the IUC