Exactly fifty years ago, at the height of the cold war, a group of academics founded the Inter-University Center Dubrovnik (IUC) to stimulate and foster collaboration between academic communities around the world, in times of high international tensions. In September 2022, 50 years later, once more the international academic community from all over the world gathered at the Inter-University Center, hosted by the University of Zagreb in Dubrovnik to emphasize and enhance inclusive international academic collaboration. While the IUC is celebrating its 50th anniversary and the cold war has long ended, the contemporary societal challenges, like the climate crisis, COVID-19, and the current events in Ukraine show that the need for finding solutions together is as relevant as it was half a century ago.

During the anniversary conference on 29 & 30 September around the central theme of Fostering Inclusive Internationalization, esteemed speakers like Prof. Dr. Ksenija Turkovic, professor of Law at the University of Zagreb and former Judge and Vice-president of the European Court of Human Rights, and Sir Geoffrey Nice KC spoke about the importance of the rule of law in times of conflict and dealing with the aftermath of conflicts. Prof. Dr. Gunn Birkelund, Secretary General of the Norwegian Academy of Science and Letters (also a professor from the University of Oslo), and Prof. Dr. Thomas Mettenleiter, president of the Friedrich-Loeffler-Institute reflected on the role of science in the COVID-19 crisis, how we can be ready for a next pandemic and make sure the inequalities in the world are not enlarged by these crises.

Academic freedom, academic collaboration, and interdisciplinary cooperation are key to finding answers to the great challenges we are facing as a society, as pointed out by Prof. Dr. Walther Zimmerli of Humbolt University in Berlin. In this search for answers, academics have to keep in mind that science is about people and that therefore people should be included in science. It is exactly this point where the Inter-University Center plays an important role, bringing together people from all over the globe and making sure that its programs are open and inclusive for all through various scholarship funds such as the newly established Marija and Mirjan Damaska Scholarship fund.

This inclusive approach should not be limited to individuals only, but also extends to an institutional level. As Rector Magnificus of Utrecht University, Prof. Dr. Henk Kummeling put it in his keynote speech: ‘international collaboration between universities until so far, has been defined by competition. For students, for PhDs, and for research grants. If we really want to find solutions for the grand challenges of society, we need a more inclusive approach in higher education, with equal and true partnerships between institutions in the East, West, North, and South. With its worldwide network, the Inter-University Center is well-positioned to enhance this collaboration and will continue to do so in the decades to come.

Digitalization plays an important role in being inclusive. The Inter-University Center invested heavily in equipment to offer online participation in its courses during the pandemic. As it turns out, this is actually something positive that came from COVID-19, since this now allows people to participate in courses that previously were not able to join.

On the occasion of the anniversary, special thanks were expressed to Prof. Mirjan Damaška who has established a scholarship fund for participants in IUC law and mass atrocity prevention programs coming from non-EU countries of Western Balkan and countries affected by conflict or instabilities. With this fund, the IUC programs would be accessible to the wider academic public. More on this generous support on the pages of Marija and Mirjan Damaška fund.

A final programme of the 50th anniversary conference can be found on this LINK. 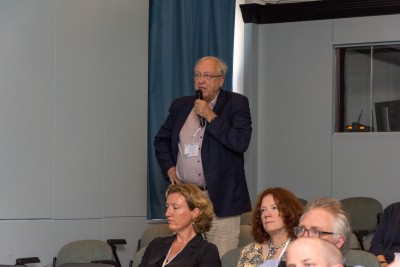